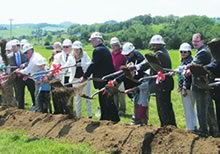 3B Consulting To Establish Headquarters In Russell County

3B Consulting Services, LLC, a consulting and engineering company that has served Southwest Virginia since 2012, announced at a news conference held July 17, 2015, that it plans to invest $2.5 million to es-tablish its headquarters in Russell County. Virginia Governor Terry McAuliffe and several other dignitar-ies were on hand to celebrate the project’s groundbreaking. To learn more about 3B Consulting, visit www.3bcs.com.

The company plans to invest $2.5 million and add 15 new jobs.

LEBANON, Va. – Governor Terry McAuliffe announced Friday, July 17, 2015, that 3B Consulting Services, LLC, a consulting and engineering service firm involved in environmental and construction work in the coalfield regions of Kentucky, West Virginia and Virginia, will invest $2.5 million to establish its headquarters in Russell County. The project will create 15 new jobs that will pay above the average, prevailing wage in the region.

Speaking about Friday’s announcement at the groundbreaking event in Russell County, Governor McAuliffe said, “I am thrilled that 3BCS has chosen to locate its headquarters in Russell County. The company offers valuable services that are successfully revitalizing coalfield regions, and gaining these new, high-paying jobs in our great Commonwealth is a great boost for the local economy. We are working hard every day to win these types of projects, continuing our efforts to build a new Virginia economy.”

“We are delighted that 3BCS is both expanding and establishing its headquarters in Russell County,” said Secretary of Commerce and Trade Maurice Jones. “After years of operating in the county, 3B Consulting Services has seen firsthand the exceptional business climate and great workforce in the region. We congratulate the company and the county, and we look forward to a long-term, successful partnership.”

“3B Consulting Services was founded in Russell County, and we are pleased that with the support we have been given, we will be able to call Russell County home for a long time to come,” said Shelley Breeding, president, 3B Consulting Services. “On behalf of our employees, their families and our many clients, we would like to thank the Governor, the Virginia Tobacco Commission, the Industrial Development Authority of Russell County, and the Town of Lebanon for their continued support of our growth and expansion.”

The Virginia Economic Development Partnership worked with the Russell County Industrial Development Authority, the Virginia Coalfield Economic Development Authority and the Town of Lebanon to secure the project for Virginia. Governor McAuliffe approved a $50,000 grant from the Commonwealth’s Opportunity Fund to assist Russell County with the project. The Virginia Tobacco Region Revitalization Commission approved $75,000 in Tobacco Region Opportunity Funds.

“Every day is a good day in Russell County, ‘the heart of Southwest Virginia,’ but a day like today is a great day in Russell County,” said Harry Rutherford, chairman, Industrial Development Authority of Russell County. “When you can welcome an expansion of a homegrown business with new capital investment on a lot that has been vacant for over 25 years and new, high-paying jobs, it’s like a dream come true.”

“Economic development is always a top priority in Southwest Virginia, and today’s announcement represents an important win for Russell County,” said Delegate Terry Kilgore, Chairman of the Virginia Tobacco Region Revitalization Commission. “The Tobacco Commission is happy to provide a TROF award of $75,000 to 3BCS to facilitate in the creation of these new jobs and investment in the tobacco region.”

Senator Ben Chafin stated, “I am proud of the example that the leadership of 3B Consulting Services is setting for our future by keeping our talented youth in Southwest Virginia. By increasing the economic opportunities here in Russell County and throughout the region, we can ensure a bright future for generations to come. These 15 new high-paying jobs in the area are invaluable to rebuilding our economy.”

“I am delighted by today’s announcement,” said Delegate Todd E. Pillion, D.D.S., who represents the Fourth District. “3B Consulting Services’ decision to remain and grow in Russell County demonstrates the company’s commitment to the region and its faith in the economic future of Southwest Virginia.”

Since the beginning of the McAuliffe administration, 434 economic development deals have been closed in Virginia with more than $7.60 billion in capital investment, which is more than twice the amount of capital investment brought to the Commonwealth by the previous two governors in the first 18 months in office.