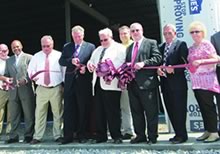 During 2014, the Virginia Coalfield Economic Development Authority provided the Industrial Development Au-thority of Russell County Virginia with a $1.5 million loan to construct a “shell building” in the county’s Cumber-land Plateau Regional Industrial Park. The news account below is about the ribbon-cutting ceremony held the following year for the completed project. The content has been adapted from an article by Heather Powers, published in The Lebanon News.

LEBANON, Va. – Virginia Governor Terry McAuliffe participated in a ribbon cutting on July 17, 2015, celebrating the completed construction on a new shell building, located in the Cumberland Plateau Regional Industrial Park in Lebanon, Virginia. The 70,000 square-foot building is a basic structure that can be used for anything from light to heavy manufacturing.

During the ceremony, Governor McAuliffe said the project is the first of several that will contribute toward a new economy for the area.

Jonathan Belcher spoke on behalf of the Virginia Coalfield Economic Development Authority and commended the Industrial Development Authority of Russell County Virginia and the county for carrying out the project. Belcher said having a structure ready is important, because the vast majority of business prospects want to look at existing buildings when they visit an area. In past decades, companies have had one to two-year time frames for doing pro-jects, but, more recently, sites are expected to be operational within five to six months.

“That is why it’s important to have a good, marketable product available when they come in, so we can maximize chances to land a project,” stated Belcher.

The VCEDA Board financed the shell project for the Industrial Development Authority of Russell County in the amount of a $1.5 million loan, which will be repaid when the building is occupied. The amount came primarily from the VCEDA’s regional account funds, which is a pot of funds used for the whole region and funded from natural gas severance taxes paid by the region’s natural gas industry.

“This is just one of many ways VCEDA is helping to expand and diversify the economy of the coalfield region,” said Belcher, who also thanked Governor McAuliffe and Secretary Maurice Jones for participating in the ribbon cutting and for their support of economic development in the coalfield region.