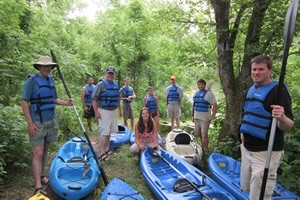 Clinch River, One of Most Biodiverse Hotspots, Driving Tourism for Region

ST. PAUL, Va. (Aug. 22, 2014) — In a bright red caboose in this small town, Terri Anne Funk rents out kayaks, canoes and inner tubes so people can enjoy something she’s loved for a while — the Clinch River.

Flowing for 135 miles in Virginia before spilling into Tennessee, the Clinch is one of the most biodiverse hotspots, said Brad Kreps, Clinch Valley program director at The Nature Conservancy. And it has recently become a driver for tourism in the region, with businesses like Funk’s and concerted efforts from a local organization, the Clinch River Valley Initiative. “We’ve always known the Clinch was one of the most biodiverse places… we’re not only proud of it, we’re trying to promote it,” Funk said.

The river is a treasure trove of aquatic flora and fauna. “It has the nation’s highest number of rare aquatic species, mostly freshwater mussels,” Kreps said of the river. He said there are 40 different species of mussels in the river — nearly 20 percent of all identified freshwater mussels in the country — and half of them are listed on the threatened or endangered species lists. In addition, there are 130 species of fish — about 100 of them non-game fish like darters and minnows.

Surrounding the river — recharging it, Kreps said — is a series of caves, which also harbor globally diverse species. Some of the caves are home to species that only live in one particular cave. The river is also unique in that it flows through a geological fault — one side of the river is shale and coal, while the other is limestone-based, Kreps said. The limestone side is home to agriculture and the caves, he said.

The mussels are the focus of much study along the Clinch. “Mussels are filter feeders that help clean the water,” Kreps said. “They also help stabilize the river,” he said. “Healthy mussel shoals help hold together the habitat of the river. They’re very sensitive and long-lived — they can live up to 50 or 60 years — and a good indicator of water quality.”

Funk and her husband started Clinch River Adventures in June 2013. Since then, she’s nearly doubled her inventory of boats and tubes because floating and boating down the Clinch has become a popular summer past-time. “It’s a national asset,” she said of the river. “We’re trying to get it to the point where when people think of Southwest Virginia, they think of the Clinch River. It’s getting to that point. There are access points every four hours now.” And volunteers with the river initiative are working to get access points every two hours, said Nick Proctor, who works with Friends of Southwest Virginia and the initiative.

“That makes it attractive to families instead of just avid floaters,” Funk said. She said her target market of floaters range in age from 5 to 85, and groups are a popular way for people to enjoy the river. She and her husband host floats for youth groups, who team up to see who can remember the most Bible verses in the Clinch River Bible Battle. Business is good and needed, she said.

“Since the coal industry has headed downhill, that’s something our area needs to take advantage of,” she said of recreational tourism efforts in St. Paul like the river floats and recently constructed ATV trails. “Seventy to 75 percent of our business is from out of town. … It helps having more than one business in town. We can feed off one another.”

Funk has partnered with Wally Smith, who teaches biology at the University of Virginia’s College at Wise, to build a mobile app that guides floaters and teaches them about interesting natural and historical points along the river.

The river, Smith said, is an “outdoor classroom.” Smith is one of the chairmen of the environmental education action group with the river initiative. He said he’s tried to match river knowledge with the state’s Standards of Learning objectives, and an annual symposium for teachers draws about 200 people.

Students helped design the app, which can be found at southwestvirginiacsi.wix.com/clinch. They also designed digital guides of hiking trails in the area so while people are using the trail, they can find different features and map them. “We were thinking about those hiking guides and translating them into the river — to turn the river into an outdoor classroom itself,” he said.

He and the students partnered with a storyteller and a local band and recorded stories along the river to the music of the region. He and Funk are working to get signs up along the river, with QR codes so people can scan and download the apps while they’re floating. “I think people are getting a better appreciation for the river,” he said. “Students we have that grew up here will say they’ve heard of the Clinch River’s biodiversity, but they don’t really know what that means.”

The Clinch initiative has been working to increase access points along the river, Proctor said, as well as boost signs in towns near the river. The Virginia Department of Game and Inland Fisheries already maintains several access points along the river, but the initiative is working with private landowners to try to get one every few miles so a floating group would have a place to stop about every two hours.

The town of Cleveland recently received a $10,000 Department of Game and Inland Fisheries grant to help design and construct a new access point, Proctor said. The initiative will help get gravel and fabric needed for a gravel access road to the site, he said. “All of these access point projects are looking back to tourism and national recreation as a whole, using the creative economy model,” Proctor said.

“What we’re finding across the region is that outdoor recreation as a whole is a cutting-edge industry in the region.” He said that will lead to economic growth for the communities near the river, bring young folks back to the region to work and raise their families and result in tourism dollars. And signs the river initiative has been erecting in towns near the river share the town’s history with the river and the uniqueness of that portion of it.

“We need to ensure we maintain the integrity of the river, because that’s the blood of all this,” Proctor said.